The logo of Swe Tha Har organization, as shown on the right, symbolizes peace which is portrayed by the dove carrying the laurel leaves. The eight rainbow-like stripes represent the eight major tribes of Myanmar. The goal of the organization is to build peaceful relationships between the various ethnic religious traditions, faiths and environment.

Swe Tha Har recognizes that underdevelopment, armed conflict, loss of life, displacement, exploitation, discrimination, poverty and suffering of the poor will not end without strategically addressing the ethnic and religious tensions which is interconnected and mobilized people for the sake of advantages and interests by some fewer people in power. While capacity building programs was carried out, the network transformed into an organization in 2008 after the Nargis Cyclone happened. STH’s experiences of involving in emergency response and rehabilitation period in Nargis effected areas led STH to become operated and functioned through structure, policies and procedures as well as with a bigger team in numbers. The timeline of the organization showed that it seems the organization’s mission shifted a bit from the peacebuilding to emergency relief and rehabilitation program especially during 2008 and the early of 2012, however, the focus of building peaceful relationship among different groups was remained the same along the process and included in every step of the organization’s works through community mobilizing, organizing and inclusiveness approach.

Swe Tha Har focuses on peacebuilding, youth empowerment, strengthening the capacity of CSOs, community development as well as grant management and partnership with local CSOs. In the process of building people's personal leadership and effectiveness, Swe Tha Har provides participating groups or communities the opportunity to identify common issues, apply their learning, discuss and where possible, work together or provide support to resolve those issues. Swe Tha Har's comprehensive understanding of the value of building right relationships is rooted in the broadly interfaith tradition of moral wisdom that stresses the necessity for personal change in bringing about a just and peaceful world. 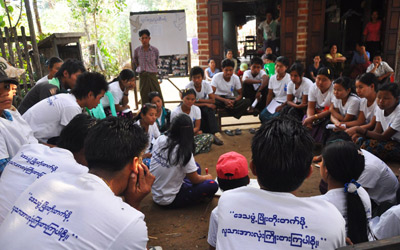